The Day I Met David Levithan

Last weekend I attended the Perth Writers Festival. This is a yearly event here in Perth and part of the Perth International Arts Festival. This was the first year I was able to attend since my previous job was at the bookshop that runs the festival bookshop every year (and I always had to work over the weekend). So I was ecstatic to be able to attend (big shout out to Cass for covering my shift at my current job!).

My excitement was for one reason only. David Levithan. I've read eight of his books, four of them being part of my All-Time Favourites list. I actually had the chance in 2010 to meet him when I was in New York and he was launching Dash and Lily's Book of Dares, but I wasn't able to attend. So I was super excited when it was announced he would be coming to lil'-old Perth. 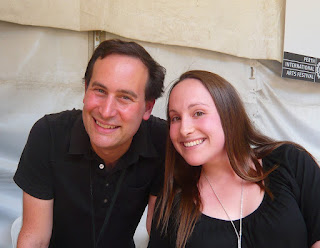 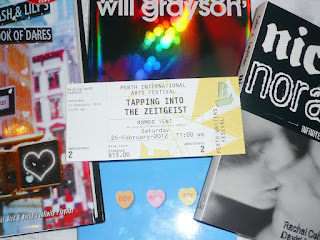 Along with fellow YA authors James Roy and Chetan Bhagat, David chatted to the audience and chairperson Julia Lawrinson about the changing nature of YA fiction and about creating your own work, rather than trying to follow in the 'it' theme. All three were very funny, something that took me by surprise, and it was a thoroughly enjoyable talk to listen to. The session was being filmed but I am yet to find out by who and how I can get hold of the footage (several emails have gone unanswered to the Festival team) which is unfortunate because it really was a delight to listen to and I would have loved to have shared it with you. 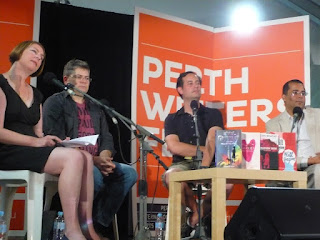 (L-R) Julia Lawrinson, James Roy, David Levithan, Chetan Bhagat
After the talk, all three authors were available to sign books. I was so nervous. I didn't even have a fan-girl moment and go all gushy. I just stood there smiling like an idiot while he signed seven books for me (three of my own, three as give-aways and one for a friend). I also got a photo with him and then later went back and managed to form a couple of coherent questions (yes the lime-green couch did exist in real life, although sadly no longer does. Also, Nick & Norah and Boy Meets Boy are 'probably' his favourites since they came first). 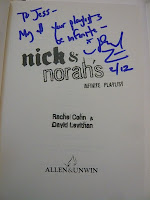 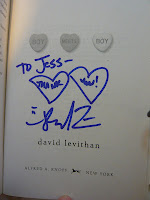 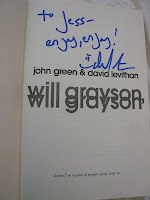 It was a great day for me. I did attend another talk with some Aussie adult authors but this eclipsed everything for me. It was also great to catch up with fellow Perth blogger Arielle from *Chimneys and Magic*. You should check out her post from the festival, she made much more of an effort than I did!Keep an eye out for a give-away in the coming weeks featuring some signed copies of David's books!
Posted by Jess - The Tales Compendium at 7:33 PM