Love is the Higher Law by David Levithan 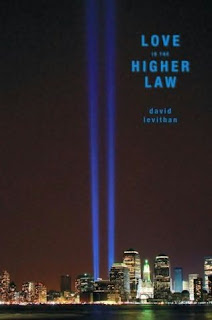 The lives of three teens—Claire, Jasper, and Peter—are altered forever on September 11, 2001. Claire, a high school junior, has to get to her younger brother in his classroom. Jasper, a college sophomore from Brooklyn, wakes to his parents’ frantic calls from Korea, wondering if he’s okay. Peter, a classmate of Claire’s, has to make his way back to school as everything happens around him.

Here are three teens whose intertwining lives are reshaped by this catastrophic event. As each gets to know the other, their moments become wound around each other’s in a way that leads to new understandings, new friendships, and new levels of awareness for the world around them and the people close by.

My Review:
Love is the Higher Law is a story about three teenager from New York City who were not directly affected by September 11th but whose lives were forever changed.

As many of you know, I have recently returned from visiting New York. While I was there, I visited the 9/11 Tribute Centre which was extremely moving and I was affected way more than I thought I would be. Reading the beginning of the book, which describes the morning of 9/11 from the perspective of our three teenagers, I actually had some trouble getting through the pages, due to the emotional content, and wasn't sure if I would be able to finish reading. Luckily for me, the actual event and description of 9/11 is only at the very beginning of the book. The rest of the story follows Claire, Jasper and Peter and how they react in the months following the aftermath of the attacks.

Claire, Jasper and Peter become stuck in their post 9/11 world, trying to find their place and find meaning in their now changed lives; Jasper trying to feel something and his frustration and anger over not being allowed to help by donating blood, Claire rallying to help, not just 9/11 charities, but all groups, wanting to do something, anything. Claire is a very interesting character, very deep and thoughtful. While feeling completely lost, she marvels at how everyone has come together to help each other (she makes a profound 'speech' on pages 105-106 that I really like). I identified most with her character and found her actions touching, especially the time she spends at Union Square.

In the week after 9/11, New York City becomes something it hasn't been since the days before the steamship: isolated. Even after the bridges and tunnels and airports open again, most of the people who are using them are making a return voyage. The tourists disappear. Bands do not show up. Concerts are cancelled left and right. Museums are empty. New York is filled with... New Yorkers.
(Peter, page 81)

Towards the end of the book it became alot more philosophical, each of the characters talking about how they feel and their new views on the world. While I like this aspect, I would have enjoyed a bit more character interaction between our three protagonists, rather than mostly hearing their thoughts. By the end, we are at a point where it is a year and a half after the attacks. We see how Claire, Jasper and Peter have changed as people. We've watched as they struggled to comprehend what has happened, and the conflicting emotions related to moving on. When is it ok to laugh? To carry on with life?

You may be wondering why I picked a book to read about 9/11 when the sadness was once again quite raw to me (having visited the tribute centre). I actually wasn't so much thinking about what I was about to read, but more whose writing I was about to read. My current quest is to read everything David Levithan has written. He is awesome.
Posted by Jess - The Tales Compendium at 10:27 AM