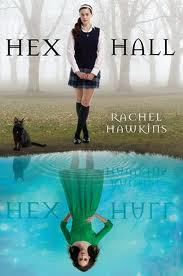 Blurb:
When sixteen-year-old Sophie Mercer discovers she's a witch, she imagines life will be full of magic, fun and ...well ...broomsticks! But her first attempt at a love spell goes disastrously wrong and, as punishment, Sophie is shipped off to Hecate 'Hex' Hall, a reform school for witches, shapeshifters and faeries.

By the end of her first day among her fellow freak-teens, Sophie has quite a scorecard: three powerful enemies who look like supermodels, a futile crush on a gorgeous warlock, a creepy tag-along ghost, and a new roommate who happens to be the most hated person on campus and the only vampire.

Worse, Sophie soon learns that a mysterious predator has been attacking students and her only friend is the number-one suspect...

My Review:
Hex Hall is a fun, easy read, perfect for lying on the beach with or snuggling in front of the fire with (depending on what part of the world you are in!). It follows a pretty standard formula for teen paranormal books but has a relatively believable storyline that doesn't involve a brand new witch somehow saving the whole world with only one semester of magic behind her.

more on the people she goes to school with, the different social cliques (especially between species), and the on-going mysteries surrounding the attacks and also Sophie's father. There are some great characters and I am especially fond of Jenna, I think she is such a strong character and am really looking forward to seeing what she and Sophie get up to in the sequel.
Demonglass, the sequel to Hex Hall, will be released in America in March and Australia in May 2011.
As a side note, I find both covers a bit strange. First off, there are no cats in the book, so why is one featured on both covers? The pond in the first is a bit random, as are the three girls on the other cover, who do not resemble any of the characters and are such a generalisation of Hex Hall students. But this could be a whole other rant...
Posted by Jess - The Tales Compendium at 8:20 AM