The Truth About Leo by David Yelland 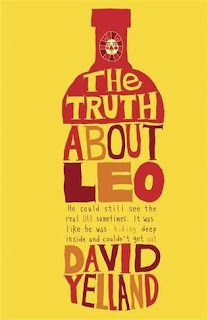 'It had happened again. Dad had shouted and yelled, thrown things and smashed things up. And then he had quietly cleaned everything away'.Leo's dad has changed. Since Mum died, his drinking is worse and now he's a different person, someone Leo doesn't recognise. The truth is that Leo is covering up for him and when things get bad Leo escapes into his own head, pretending every thing's OK. Things need to change, but what can Leo do? No one understands, except maybe his friend Flora. Leo wants his old dad back so they can be happy again - because Dad is all he has left.

This was one of the most heart-wrenching and powerful books I have ever read. I felt so much pain for this little boy whose life was completely miserable, I just wanted to reach out and hug him. It is an important story about friendship and love, and that no matter how bad things get, there will always be someone out there who cares, and that you are not alone with your suffering. Life can get better.

Ten-year-old Leo lives everyday with the pain of having lost his Mum to cancer. He also lives with a secret; he's lost his Dad as well. Leo's father is an alcoholic, and everyday Leo works to keep this a secret from those around him, because if someone were to find out, he would be taken away; from his Dad, their house and the memories of his mother. He never knows what mood his father will be in, and his school life is no better. Due to all the problems at home, his school work and attendance has suffered and he is constantly bullied by his horrible teacher and the other kids. As a coping mechanism, Leo has created his own world, Planet Leo, one he can escape to when things get bad, remembering the time he spent with his Mum and dreaming about an alternative life for himself. But Leo can't escape from everything, and one devastating afternoon, his secret is discovered.

'Inside the house, Leo and Dad were actors in a play that played every day and every night. But they were the only audience too.'

Leo has a highly unstable home life, one where he is the parent, taking care of his father like a child. While this is a story told from the perspective of a 10 year old, it does deal with adult issues, and should only be read by mature ten-year-olds and upwards. It would also be the kind of book that a parent and child could read together with the benefit being the issues could be further explained.
Posted by Jess - The Tales Compendium at 12:12 PM