The Last Thing I Remember by Andrew Klavan 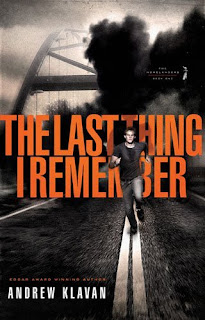 Charlie West is a good kid. He studies hard, trains in martial arts, has just gotten the number of the prettiest girl in his class, and wants to join the air force after graduation. At least, that's the last thing he can remember.

But he has woken up in a nightmare. He's strapped to a chair, and someone outside the door just ordered his death. By calling on his deepest reserves of strength and focus, Charlie manages a desperate escape . . . only to find out that this nightmare isn't ending. There's a whole year of his life that he can't remember, a year in which he was convicted of murdering his best friend and working with terrorists.

Now, with the police hunting him and a band of killers on his trail, he's got to find the answers to some of the deepest questions there are: Who am I? What do I stand for? And how am I going to stay alive?

There is plenty of suspense and mystery in this story which will continue into the sequel as things unravel. It reminds me of a cross between the Jason Bourne books and Gabrielle Lord's Conspiracy 365 series. The sequel, The Long Way Home, will definitely be interesting as Charlie tries to uncover the truth and clear his name.
Posted by Jess - The Tales Compendium at 8:46 PM