Nona and Me by Clare Atkins 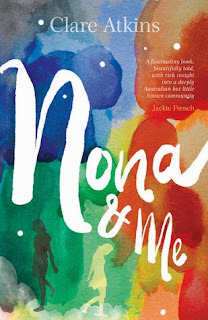 They are also best friends. It doesn’t matter that Rosie is white and Nona is Aboriginal: their family connections tie them together for life.

Born just five days apart in a remote corner of the Northern Territory, the girls are inseperable, until Nona moves away at the age of nine. By the time she returns, they’re in Year 10 and things have changed. Rosie has lost interest in the community, preferring to hang out in the nearby mining town, where she goes to school with the glamorous Selena, and Selena’s gorgeous older brother Nick.

When a political announcement highlights divisions between the Aboriginal community and the mining town, Rosie is put in a difficult position: will she be forced to choose between her first love and her oldest friend?

In A Nutshell:
A story about family in all its forms, friendship, growing up and finding yourself.

My Review:
Set in the Northern Territory of Australia during the 2007 Intervention by the Howard Government, through to the election of Kevin Rudd and his ‘Sorry’ speech, Nona and Me is an incredibly important and special book.

The story follows Rosie who, for the most part, has distanced herself from her Indigenous family after her ‘sister’ Nona, left the community six years earlier. Trying to fit in with Selena and her older brother Nick, who have moved to town from Sydney, has led Rosie to ignore her upbringing. When Nona re-emerges in the middle of year 10, Rosie is forced to re-examine what exactly the word ‘family’ means to her and what she is prepared to risk losing for the cost of ‘fitting in’.

With tensions building in the community due to a government intervention, the death of someone in her adoptive family causes Rosie to reintegrate herself and partake in traditional ceremonies. In the process, she re-evaluates what, and who, is important to her.

A story about family in all its forms, friendship, growing up and finding yourself.

Nona and Me is a positive book that helps to combat the generally bad press that is showered over the Indigenous communities in Australia. While our protagonist, Rosie, is not of Aboriginal descent, she has grown up living in an Indigenous community in which she and her parents have been ‘adopted’ by one of the families. The novel shows Rosie’s perspective from being both inside and outside the community as she’s torn between two worlds, trying to figure out where she belongs. Included throughout the text are flashbacks of Rosie and Nona’s childhood, which helps provide a backstory, as well as contrast, to the novel’s present-day events.

Nona and Me helps dispel stereotypes and emphasizes the importance of family and community. Just because a way of life might be different from the one you lead, doesn’t make it wrong. We are a world of many cultures and each individual is influenced by their surroundings. It is our differences that make us unique, and also bring us together.

I was caught ‘off guard’ as to how much of a page-turner Nona and Me would be. In the blink of an eye, I was almost finished. It was surprisingly captivating and I'd love to see this become required reading or go on a recommended reading list in all high schools.

Thank you to Black Inc. for providing this review copy.
Posted by Jess - The Tales Compendium at 3:31 PM