The Astrologer's Daughter by Rebecca Lim 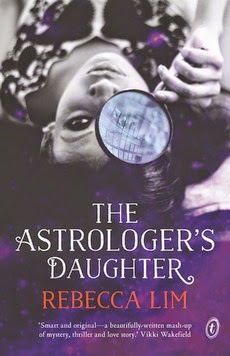 Blurb:
Avicenna Crowe’s mother, Joanne, is an astrologer with uncanny predictive powers and a history of being stalked. Now she is missing.
The police are called, but they’re not asking the right questions. Like why Joanne lied about her past, and what she saw in her stars that made her so afraid.

But Avicenna has inherited her mother’s gift. Finding an unlikely ally in the brooding Simon Thorn, she begins to piece together the mystery. And when she uncovers a link between Joanne’s disappearance and a cold-case murder, Avicenna is led deep into the city’s dark and seedy underbelly, unaware how far she is placing her own life in danger.

Pulse-racing and terrifyingly real, The Astrologer’s Daughter will test your belief in destiny and the endurance of love.

In A Nutshell:
An intriguing mystery set amongst Melbourne’s Chinatown.

Having an astrologer for a mother and constantly moving around the country has never been particularly easy for Avicenna Crowe. Joanne is not a fortune teller or a psychic but can read what has been written in your stars from the day you were born. When Joanne reads her own stars and discovers her fate, she disappears without warning leaving her daughter desperate for answers. After contacting the police, the case is handed over to missing persons and Avicenna is faced with prepaid clients desperate for the answers Joanne promised them via their star charts. Avicenna reluctantly carries on her mother’s work, something she has always known how to do but shunned. Even though she just wants to sit in a pile of grief and despair while the police look for her mum, Avicenna decides to honour her mother’s rules of business. Unfortunately, in the process, she stumbles upon a decades old mystery and cold case, placing her in unexpected danger as well as uncovering secrets about her mother and father, and their families.

Set in Chinatown of inner city Melbourne, The Astrologer’s Daughter is gritty and dark but also hopeful and compassionate, simultaneously highlighting the importance of looking beneath the surface of appearances. For Avicenna, she built protective walls around herself long ago in order to avoid getting hurt, but in turn, because of these defence mechanisms, she ends up treating people the very same way she was trying to avoid.

I love a good mystery and I like how a lot of the story-points all tied together. I was a little dissatisfied with the ending and would have liked if certain aspects were elaborated on, however I can’t comment on these without including spoilers.

Overall I really enjoyed The Astrologer’s Daughter. The astrology aspect was interesting and the mystery of both where her mother is and the cold case, kept the story moving with intrigue. I would love to see more of Avicenna (and Simon) in a sequel and it did seem like there would be further opportunities to expand their storylines. Fingers crossed.

Thank you to Text Publishing for providing me with this review copy.
Posted by Jess - The Tales Compendium at 9:13 AM