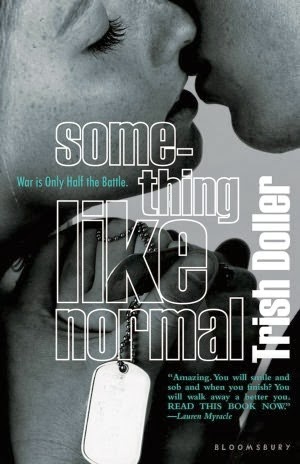 Blurb:
When Travis returns home from a stint in Afghanistan, his parents are splitting up, his brother’s stolen his girlfriend and his car, and he’s haunted by nightmares of his best friend’s death. It’s not until Travis runs into Harper, a girl he’s had a rocky relationship with since middle school, that life actually starts looking up. And as he and Harper see more of each other, he begins to pick his way through the minefield of family problems and post-traumatic stress to the possibility of a life that might resemble normal again. Travis’s dry sense of humor, and incredible sense of honor, make him an irresistible and eminently lovable hero.

In A Nutshell:
Trish Doller has crafted what I perceive to be a realistic portrayal of young returned servicemen who are struggling to cope with readjusting to the ‘real world’. I loved Something Like Normal and felt so much love for it while turning the pages and upon finishing it. Sometimes you just feel something for a book that words can’t properly describe. Something Like Normal is one of those books for me.

My Review:
Twenty-year-old Travis has returned home to Florida for a short break after 18 months in Afghanistan with the Marines. However, his trip homes doesn't end up being much of a 'break' with all the family drama he comes back to. His super-proud mum is grateful to have her son home and alive and is so desperate to help and be part of his life again that she is rather overbearing. It’s totally understandable, but a little too much for Travis to handle. But with her son home and with his support, Travis’s mum finally has the strength to do something about her husband’s infidelity. His brother, who is dating Travis’s ex-girlfriend, who broke up with him in a Dear John letter, is pretty indifferent to his return yet his ex, Paige, can’t stop sneaking back into his bed for night time visits. And Travis’s father, as an ex-football player, has never respected or supported Travis since he quit football, something he never liked and was mostly under the shadow of his father’s championship career. While Travis never intended to join the Marines until the day he signed up (mainly to escape his father), he has become his own person and excelled in his field. Upon his return, now more than ever, Travis and his father butt heads. The difference now is that Travis is big enough to stand up to him.

While his family is falling apart around him, Travis struggles with PTSD and is haunted by the death of his best friend Charlie, a fellow marine, who keeps appearing and talking to him. With his mind playing tricks on him, Travis keeps this hidden from those around him, desperate to get back to base, and have things go back to ‘normal’.

Adjusting back home into his old friendship group is harder than expected. His mates are all still hanging around their home town, lazing about and not moving forward with their lives. Travis on the other hand has grown up and experienced and witnessed things the others probably couldn’t even imagine. The usual hometown gossip is of no interest to him and he just wants to get back to base. Home doesn’t feel like home any more.

Thankfully, Travis has a visit from some of the others guys in his platoon. These guys show that everyone handles and processes thing differently and that there is no ‘normal’ way to feel.

And then there’s the girl. Harper was the first girl Travis can remember wanting but after embellishing the truth about supposed events during a ‘Seven Minutes in Heaven’ game with her back when they were 14, Travis blew any hope of Harper ever speaking to him again. The high school rumour mill exploded and Harper’s hatred towards Travis is still as strong as ever six years later. However, after a random meeting and a punch in the face from her, Travis’s luck with Harper begins to change. Harper opens the door for Travis to have a second chance, and perhaps give herself the only real chance she’s ever had. She’s a good person and always liked him until the ill-fated game. Harper and Travis slowly begin spending more time with each other including a night-time beach expedition to watch baby sea turtles hatch. It’s easier for Travis to hang out with Harper than any of his old friends because there are no expectations with her. When he is with her, he is sweet but broken. He doesn’t need to show the bravado that he does in front of his high school friends, ex-girlfriend, brother and father. He can be himself, let his guard down and in that, start to address the PTSD he is suffering.

Trish Doller has crafted what I perceive to be a realistic portrayal of young returned servicemen who are struggling to cope with readjusting to the ‘real world’. I loved Something Like Normal and felt so much love for it while turning the pages and upon finishing it. I adored Travis. I’d want him to have my back any day. And I loved Harper. She’s the kind of girl I would be best friends with. It has taken me weeks to try and find the right words to describe why I loved it so much but I just can’t find them. Sometimes you just feel something for a book that words can’t describe. Something Like Normal is one of those books for me.
Posted by Jess - The Tales Compendium at 3:45 PM