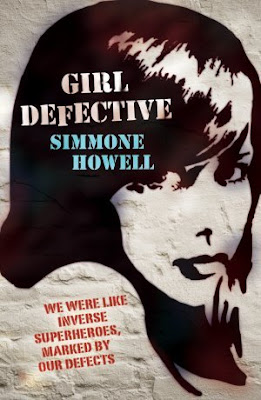 We, the Martin family, were like inverse superheroes, marked by our defects. Dad was addicted to beer and bootlegs. Gully had "social difficulties" that manifested in his wearing a pig snout mask 24-7. I was surface clean but underneath a weird hormonal stew was simmering...

It's summer in St Kilda. Fifteen-year-old Sky is looking forward to great records and nefarious activities with Nancy, her older, wilder friend. Her brother – Super Agent Gully – is on a mission to unmask the degenerate who bricked the shop window. Bill the Patriarch seems content to drink while the shop slides into bankruptcy. A poster of a mysterious girl and her connection to Luke, the tragi-hot new employee sends Sky on an exploration into the dark heart of the suburb. Love is strange. Family Rules. In between there are teenage messes, rock star spawn, violent fangirls, creepy old guys and accidents waiting to happen. If the world truly is going to hell in a hand-basket then at least the soundtrack is kicking. Sky Martin is Girl Defective: funny, real and dark at the edges.

In A Nutshell:
Mysteries and music in Melbourne. Enough said.

My Review:
I think the mark of a good book is one where you keep thinking about it long after you have finished it. I read this ages ago and I still find my mind wandering back to it.

I really loved Girl Defective. In the interests of full disclosure, I didn’t think I would. I didn’t enjoy Everything Beautiful which everyone else seemed to, and so I didn’t have high hopes for Girl Defective. But, I liked the premise so I thought I would give it a go and I’m so glad I did. It just proves that you can’t judge an author on one book alone. Some stories will speak to you, some won’t. Girl Defective was un-put-down-able.

Sky Martin lives with her wannabe detective younger brother Gully and their record obsessed Dad above his beloved record store. Their mother, who went through a ‘bird faze’ naming them Seagull and Skylark, walked out on them three years ago to ‘find herself’. She now lives in Japan and works on her creative outlets, which currently involves performance art while covered in tampons.

At 15, Sky is a bit of a loner. She’s lost in the world, searching for her place and her own identity. She spends her days either at school in the computer lab vandalising her mother’s website, at the record store, watching over Gully who has taken to wearing a pig-snout mask and pretending to be a secret agent, and arguing with her dad who refuses to move with the times in order to save the store. Her only friend is 19-year-old Nancy who is a bit wild and carefree, somewhat unreliable and the complete opposite of Sky. But she makes Sky feel alive and Sky holds onto their unlikely friendship like a lifeline.

“Sometimes I thought if it wasn’t for music I wouldn’t be able to cry or laugh or feel giddy or wild.”

Set over the course of six weeks, the lives of the Martin family takes a little detour down the seedier streets of St Kilda as Gully tries to investigate who threw a brick through their shop window, Nancy becomes obsessed with rock star Otis, and Sky’s dad, Bill, hires new-comer Luke to help out at the store. While Sky is originally grumpy about Luke employment, she can’t help but be intrigued by him, watching him over the top of her Record Collector magazine. Luke is quiet and sad and we learn very early on that he is in town to try and piece together the last months of his sister’s life, a life that seems remarkably similar to Nancy’s.

With Luke searching for answers about Mia’s death, Sky becomes fascinated by the life that Mia appears to have led and does a little investigating of her own while pondering her feelings for both Nancy and Luke. Her character evolves through the story and by the end of it I was so proud and happy for her with the way things eventuated, with the risks she takes and the realisations she comes to.

I loved both Gully and Bill. Gully is eccentric and quirky and I love him to bits. I think it is implied he has Asperger’s but I’m not knowledgeable enough about the condition to say for sure. Bill’s dedication to records and his refusal to stock CDs or sell online, let alone stock anything released after 1995, is endearing, even if he is running his business into the ground.

Last but not least, I love mysteries and novels that incorporate music. The Martin family are music snobs but we love them anyway. I really enjoyed the music references, even if I only knew half the bands mentioned, but I could still appreciate the love and dedication they had towards their favourites.

“I like watching people’s faces when they listen to music. I like how it’s private. Even at a gig if you’re all hearing the same thing, you’re really all hearing something different.”

Thank you to Macmillan for this review copy.
Posted by Jess - The Tales Compendium at 6:50 PM