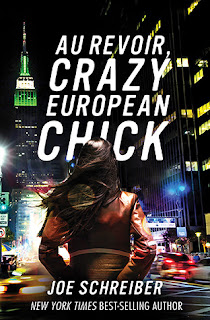 It’s prom night—and Perry just wants to stick to his own plan and finally play a much-anticipated gig with his band in the Big Apple. But when his mother makes him take Gobija Zaksauskas—their quiet, geeky Lithuanian exchange student—to the prom, he never expects that his ordinary high school guy life will soon turn on its head. Perry finds that Gobi is on a mission, and Perry has no other choice but to go along for a reckless ride through Manhattan’s concrete grid with a trained assassin in Dad’s red Jag.

Infused with capers, car chases, heists, hits, henchmen, and even a bear fight, this story mixes romance, comedy, and tragedy in a true teen coming-of-age adventure—and it’s not over until it’s “au revoir.”

In A Nutshell:
An entertaining, fast-paced read with a female assassin, bad guys, bullets and blood.

My Review:
Au Revoir, Crazy European Chick is a fast-paced, enjoyable, light read that sees Perry accidentally on a roaring adventure one night through New York City when he discovers his Lithuanian exchange student, Gobi, isn’t quite who she says she is.

As Perry becomes Gobi’s chauffeur, in his father’s Jaguar no less, Gobi tracks down the five criminals responsible for the death of someone she cared about. Avenging death comes at a price though as they come face to face with bad guys, bullets and blood, and some knife wounds that end up a little too close for home for Perry.

What you see is not always what you get and this time, it ends with a bang!

I've always loved spy-type novels and Gobi, the kickass female assassin, was a bit of a guilty pleasure for me. It’s no deep read, but it is an entertaining one.