The Industry by Rose Foster 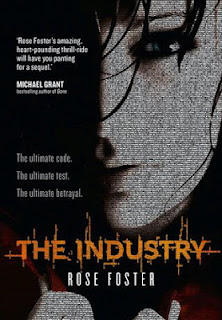 
Blurb:
Kirra Hayward is an ordinary sixteen year old - smarter than most, but otherwise completely anonymous. When she solves an unusual decrypting puzzle on the internet to fill in a moment of boredom at school, she has no idea of what she's letting herself in for.

Kidnapped by a shadowy organisation of mercenaries known only as The Industry, Kirra soon discovers how valuable her code-breaking skills are. And when she stubbornly refuses to help them, they decide to break her ... by any means at their disposal.

Kirra knows that to protect herself, she must trust no one, not even her fellow prisoner, Milo. But as time goes by she wonders if he is the only person she can rely on.

In A Nutshell:
Kirra’s in a no-win situation. She struggles with the moral dilemmas that are put in front of her and tries to pick the lesser of two evils. But can she live with herself over the choices she makes? Part psychological thriller, part espionage conspiracy, I look forward to seeing what direction Foster will take in the sequel.

My Review:
Unlike a lot of teen crime style books, Kirra isn’t a spy. She has, quite seriously, been kidnapped. We’re not talking about a nice kidnapper, who lets her watch TV and sleep in a relatively comfy room until her parents pay a ransom. No, for Kirra, there is no ransom; money can’t buy what Kirra can offer. She spends her days in a freezing cold cell, with a metal toilet, 24/7 guards, supervised showers, meals if the guards remember, and torture if she doesn’t comply with her kidnapper, Latham’s, requests. She suffers hypothermia and watches the closest person she has to a friend be executed. She’s been transported somewhere overseas and she knows they will never release her. As her incarceration passes six months, her hope and resolve begin to fade away. She’s a long way from her invisible existence back in her quiet Australian suburb.

Kirra’s in a no-win situation. She struggles with the moral dilemmas that are put in front of her and tries to pick the lesser of two evils. But can she live with herself over the choices she makes? I think the sequel is going to be really interesting as Kirra is thrown deeper into The Industry, whether she wants to be or not.

The character of Kirra is an interesting one. I really liked her at the beginning; her feelings of isolation at school and in her family were really sad and not unusual for many teenagers. I really liked her relationship with her brother Mitchell and I hope he is brought back into the story in some way. I personally found Kirra to be less likeable the further the story went on and even though she attempts to stand up for herself, I don’t think she will really come into her own skin until the sequel.

I’d love to find out more about the mysterious Desmond and why he is apparently so infamous. As for Latham, I thought the inclusion of his daughter, Simone, was interesting. Generally bad guys like to keep their families as separate from their dealings as possible, but here, Simone is living metres away from Latham’s prisoners. With Milo, I made assumptions about him from the start and I was glad to see I was correct. The development of Milo and Kirra’s relationship came as no surprise to me. Perhaps I’ve read and seen too many espionage/crime books, TV shows and films to know that bonds are always formed between prisoners. I won’t say any more on the topic as I’m sure many readers will come to different conclusions.

I’m looking forward to seeing which direction Foster will develop the story in. My guess is it will either take an espionage/Cherub series direction, or a more psychological thriller route.

Posted by Jess - The Tales Compendium at 8:57 AM