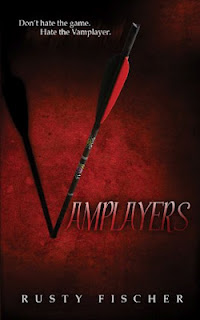 Blurb:
At the Afterlife Academy of Exceptionally Dark Arts, the vampires in training follow one of two tracks: they become either Sisters or Saviors. Of course, everyone wants to be a Savior, swooping into infested high schools in matching red leather jumpsuits and wielding crossbows, putting down swarming vampires with deadly efficiency.But Lily Fielding is just a Sister—a Third Sister at that, a measly trainee. When Lily and her two Sisters, Alice and Cara, are called out to their latest assignment, she figures it’s just another run-of-the-mill gig: spot the Vamplayer (part vampire, part player), identify the predictably hot, trampy girl he’s set his eyes on, and befriend her before the Vamplayer can turn her to do his bidding.Finding the sleek and sexy Vamplayer, Tristan, and his equally beautiful and popular target, Bianca, is easy. And when Lily meets the adorably geeky Zander, she too falls under a lover’s spell. But this assignment turns out to be trickier than most when the Third Sister must battle the baddest vampire of all.

In A Nutshell:
A light, entertaining and humorous read, Vamplayers is total comfort food.

My Review:
I’ve read countless novels and short stories by Rusty Fischer and enjoyed them all. In Vamplayers, Fischer has moved away from his usual zombie protagonist and has reworked vampire mythology. They still drink blood but have a serious sweet tooth. Some are good, some are bad and the bad don’t just want to kill, they want to turn their victims, and their tactics have been perfected. Daylight may not be an issue, but garlic and holy water still is. And there is the ever-present pecking order that infiltrates every aspect of society, n both human and vampire worlds. There are rules the undead have to live by, and consequences are severe.

Lily is a Sister, whose job is to identify the Vamplayer before he manages to turn the whole school. The Sisters then call in the Saviors who take the Vamplayer down. Lily is sick of being a Sister but can’t seem to pass the test to become a Savior. When Lily and her fellow Sisters are sent to the latest school, she is determined this will be her last ever assignment as a Sister. The school is just like every other high school; the bitchy popular girls make everyone else’s lives miserable, there’s the hot guy who knows he is, and the nerdy but really totally awesome kids.  This time, Lily is to play the outcast. Her fellow Sisters are also to treat her this way to fit in with the popular crowd and gain their acceptance. Normally this exclusion would end when the girls are behind closed doors, but this time, Cara and Alice begin to take it a bit too seriously. As the girls turn on Lily, she is left utterly alone and the responsibility to find the Vamplayer before the whole school gets turned, falls solely on her shoulders.

With a focus on friendship, stereotypes and peer-pressure, it’s a typical highschool environment, but one that takes the opportunity to show characters who know what they want and try to succeed, no matter the obstacles thrown in their path. While I could see what was going to happen, Lily couldn’t and I think that is common for teenagers, to not look deeper than what is on the surface or beyond first impressions. While the story arc was somewhat predictable, the end certainly wasn’t. After the climatic showdown, I was expecting a very different conclusion but Fischer’s recreated vampire lore opened up a whole new realm of possibilities.

A light, entertaining and humorous read, Vamplayers is total comfort food.
Posted by Jess - The Tales Compendium at 2:34 PM