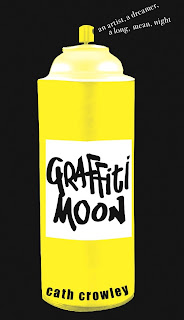 My Rating: 5/5
Blurb:
Let me make it in time. Let me meet Shadow. The guy who paints in the dark. Paints birds trapped on brick walls and people lost in ghost forests. Paints guys with grass growing from their hearts and girls with buzzing lawn mowers.

It's the end of year 12. Lucy's looking for Shadow, the graffiti artist everyone talks about.

His work is all over the city, but he is nowhere.

Ed, the last guy she wants to see at the moment, says he knows where to find him. He takes Lucy on an all-night search to places where Shadow's thoughts about heartbreak and escape echo around the city walls.

It is the last night of year 12 and Lucy and her two friends, Jazz and Daisy, are aiming for an all-nighter. Lucy, as always, is looking for Shadow. Jazz wants to find a hot boy and Daisy wants to have fun while deciding if she should dump her boyfriend. It just so happens that the boy Jazz chooses happens to be hanging with his mates; Dylan, Daisy's boyfriend, and Ed, who Lucy has an embarrassing history with. And so an adventure all over Melbourne begins!

We are lucky enough to get to hear the adventure from both the perspectives of Lucy and Ed, as well as little snippets of Poet's poetry (Poet writes the words to some of Shadow's artwork). The story is funny, witty and breath-taking. It literally had me laughing out loud at one point (and I received some strange looks as I was on a train at the time)! It is really great to have both the girl and the guy's perspectives. As a plus, at some points the perspectives cross over and we get to see how each of them interprets what the other has said or done, which is not something you see often (usually it is a straight swap to the other person and on with the story rather than going back and seeing what has just happened from the other side).

The conceptual art that Crowley has imagined for Shadow is amazing and I would love to turn around a corner and see some of the pieces on a wall. As the reader, we are able to feel connected to the artwork, not only because it is described in detail but we also get to hear not only how Shadow's pieces make Lucy feel but also what her creative force and the emotions behind her own art are. It is this kind of personal touch that really reaches out to the reader.

Graffiti Moon will speak to art-minded people the same way Nick and Norah's Infinite Playlist reached out to those who adore music.

I really liked the extra personal details included such as Lucy's family's quirky arrangement, Jazz's supposed psychic abilities and Ed's inner turmoil over his future, the end of a past relationship and the death of a close friend. There is so much depth to all the characters that you just can't help love them all. You can also feel the tingles of attraction between certain characters. ZING!

I have had one of Cath Crowley's previous titles, Chasing Charlie Duskin, on my TBR list for ages and I am definitely going to have to put it on order because if Graffiti Moon is anything to go by, I'll be reading a lot more of Cath Crowley in the future.

Posted by Jess - The Tales Compendium at 9:24 PM