Before I Fall by Lauren Oliver 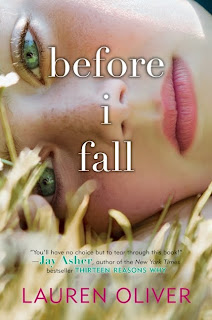 
'They say that when you die, your whole life flashes before your eyes, but that's not how it happened for me'

Sam Kingston is dead. Except she isn't.

On a rainy February night, eighteen-year-old Sam is killed in a horrific car crash. But then the impossible happens: she wakes up in her own bed, on the morning of the day that she died. Forced to live over and over the last day of her life - the drive to school, skipping classes, the fateful party - she desperately struggles to alter the outcome, but every morning she wakes up on the day of the crash.

This is a story of a girl who dies young, but in the process learns how to live. And who falls in love...a little too late.

I truly loved ‘Before I Fall’ and read it in one sitting. For a debut novel it is amazing! I laughed, I cried, it completely blew me away.

Each day, Samantha learns something new about the type of person she is/has been, as well as discovering new things about those around her. She has seven days to try and fix her own fate and those of the people around her and as she learns along the way that maybe the purpose of her do-overs are not to save her own life, but the lives of her peers.

I have seen in some other reviews that some people feel the book is too long, especially as Sam repeats her days, but I disagree. I find that each day gets told differently as Sam discovers new things and decides to play the day differently, especially day four.

This is a great YA book as it deals with issues that teens are constantly surrounded by; friends, bullies, awkwardness, high school, the highs and the lows, relationships, drinking, sex, drunk driving, drama, pain, love and hate, secrets and lies. It may also help readers dealing with their own insecurities, pain, or identity. It is a story that reminds us what really matters in life and that everyone has their own problems, even if they are not visible on the surface.

Sometimes the smallest action against someone can truly affect them and change their life forever.

**Major Spoiler Alert**
I would have loved a final chapter or epilogue to find out how the characters Sam helped along the way deal with her death. This is probably because when you find a story and/or characters that you really enjoy reading, you never want it to end, but I also recognise the fact that the aftermath is not what the story is about. Still, I would love a follow up book that comes from the perspective of Juliet, starting as she heads to the party (on Sam’s seventh day).
Posted by Jess - The Tales Compendium at 8:54 PM