The Piper's Son by Melina Marchetta 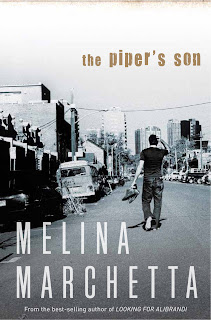 In The Piper's Son, Melina Marchetta focuses on Thomas Mackee, one of the characters from Saving Francesca. Thomas's life sucks. His once happy and close family has been torn to shreds after his Uncle Joe was killed in the London bombings in 2005. Tom's dad is an alcoholic who has gone AWOL, his mother and sister have disappeared to Brisbane and his Aunt Georgie is pregnant but won't publicly acknowledge it. And Tom, well he's lost his job, his roommates have kicked him out, and he's beating himself up over losing one of his best friends after a one-and-a-half night stand 2 years ago.

As Tom pushes everyone away and spirals into a pit of depression we discover the strength, hope and love that family and friends are capable of as they attempt to get Tom's life slowly back on track. I also like that the story is told in third person, following both Tom and Georgie.

By the end you are left with a feeling of hope, and that family and true friends are always there for you, no matter how tough things get and how much you try to push them away.

Having not read Saving Francesca I was worried that The Piper's Son wouldn't make sense and that I wouldn't be able to follow the story, but that wasn't the case. While it does refer a lot to what happens in Saving Francesca, it in no way gave me any trouble. I would really like to read Saving Francesca now and while I don't feel the need to hear the story of Justine or Tara, I would really like to find out what has happened to Jimmy (the 5th member of their group), which Marchetta has given small clues to in The Piper's Son and I think has paved the way for another book focusing on him.

Posted by Jess - The Tales Compendium at 8:18 AM